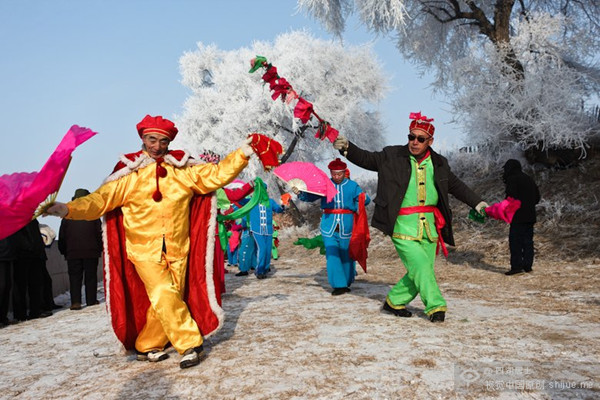 As the birthplace and one of the settlements of Manchu people, there are over 140,000 Manchus in Jilin city, consisting of about four percent of its population. In the city, there are 34 Manchu towns and one Manchu and Korean village. The Manchu town on Wula Street of Yongji county had the largest Manchu population. There, many of the architectures demonstrate the characteristics of the Qing Dynasty (1644-1911), and the customs show deep cultural and national characteristics. Among them, Shamanism rites and weddings are the most representative activities showing Manchu culture and characteristics.

Solemn shamanism rites are held to worship ancestors and are usually held in spring and autumn of the years of the Dragon, Tiger or Snake. They are divided into a home fete ceremony and tribe fete ceremony. Home fete ceremonies are held at either funerals or weddings, or any time when any member of the family gets married or promoted, rebuilds a house or moves, or celebrates a birthday or a son or daughter's recovery from illness. However, tribe fete ceremonies are held when the whole tribe gets together or has harvests. No matter the kind of fete ceremonies, all the people in the tribe should be invited. During the activity, there are a series of activities, such as offering sacrifices to holy trees, offering pigs as sacrifice to a holy stick, choosing a surname, steaming sticky rice and making glutinous rice cake.

The weddings of Manchu people are also interesting and unique. Over the several days before the wedding, the bride needs to send her trousseau and other garments for the wedding to the fiancé's home. The next day, the fiancé should visit the fiancée's home and express his thanks. Whatever the season is, the bride should wear cotton-stuffed coats. After arriving at her mother-in-law's house, in front of the gate, the groom should shoot three arrows at the sedan chair the bride arrived in for good luck.